During this episode we discussed the films of Ridley Scott. I have admired the work of the British director for some time. Sir Ridley (yes, he was knighted by Queen Elizabeth back in July, 2003 for his film contributions) as we noted has an extensive list of directorial efforts as well as an even longer list of producing credits. He has produced major films, TV shows as well as commercials for the small screen. You may be familiar with his “Scott Free” production image which has a quickly fleeing individual disappearing into the distance. His most celebrated commercial production, of course, was the famous 1984 themed effort introducing the Apple Macintosh computer during the 1984 Super Bowl broadcast.

The emphasis for our podcast, of course, was on his film making career which is littered with several significant, or more appropriately, iconic movies. However, before venturing into his filmography I chose to spend time discussing a film which I believe was not as successful as it might have been and that its message is one consistent with Scott’s personal interests. That film is Kingdom of Heaven, starring Orlando Bloom, Eva Green, Marton Csokas, Liam Neesom and a particular favorite of mine, Jeremy Irons. It is a film I like and have viewed many times. In fact, as Eddie and others know, I view the DVD every 5 months or so.

The film, set in 1187, details Balian of Ibelin’s efforts to defend Jerusalem from the onslaught of the Muslim army led by Saladin. The story, not totally accurate historically, still resonates with how a man inspired to live up to the code of knighthood and do the right thing amidst events that are predicated on less noble motives. Scott seems to enjoy placing films in older times where the main character is forced take action and live up to a certain code as he tries to do right amidst less than ideal circumstances. That theme is evident in two other films, Robin Hood (2010), both starring Russell Crowe.

Kingdom of Heaven, which Scott produced and directed, was released in 2005. I was not well received and did not do especially well at the box office. There may have been several factors. A Middle East and Muslim inspired story coming fairly soon after 9/11 may have dampened interest. The late film critic, Roger Ebert, even commented that Scott was a brave man to release a film dealing with a clash between Christians and Muslims. Although Ebert thought the film was thoughtful and dealt more with human emotions than being merely a historically based action film. This is a view point with which I agree and attempted to explain in my commentary.

I noted a couple of other reasons I thought the film did not receive the consideration it should have. One, the theatrical release was edited apparently to meet time considerations. I saw the film in the theatre and like it. However, I later learned of the director’s cut version on DVD and purchased it. Kingdom of Heaven (Roadshow Director’s Cut) This is the version I prefer because it has around another 22 minutes of film. The total for this version is 194 minutes. This version fills in some story gaps that were muddled in the original. Hence, the back story and certain character motivations are much clearer. I believe, as I stated on the podcast, that the director’s vision is what I want to see as it is the story he intended to tell before management decided to make it fit theatre scheduling.

The second reason I noted involved Orlando Bloom as the hero, Balian. Bloom had just appeared previously in Troy – Wolfgang Petersen. That film detailed the Trojan War and starred Brad Pitt as Achilles, Eric Bana as Hector and Bloom as Paris. In this role, Bloom is cowardly and despite his bravado is dependent upon his brother Hector to protect him. After this character portrayal many film goers (especially those who knew him from the Lord of the Rings trilogy or his role in the Pirates of the Caribbean series) may have been unable to accept him as a heroic figure in Scott’s film. Whatever, I enjoy the film and believe it to be a significant film in Scott’s repertoire. And, I encourage you to view it in the director’s cut version and decide for yourself.

Alien – His 1979 film not only introduced Sigourney Weaver in a major role but also brought a new, malevolent monster into the space and science fiction genre. The iconic status of the original film has been validated with a host of films that have utilized the creature including Scott’s more recent revisiting of the Alien adventure with his Prometheus and Alien: Covenant. Eddie and I agreed that the latter film provided a more cohesive retelling of the storyline than Prometheus. Space is a theme Scott revisited in his later film, The Martian (2015), starring Matt Damon.

Gladiator, as previously noted, has a somewhat iconic patina. Winning the Oscar for Best Picture certainly helped along with a strong, heroic character (again the code idea). Now long after Maximus has passed from the scene the storyline is apparently going to be revisited 20-25 years after the original story. Likewise, now that Disney owns 20th Century Fox, which was home to the original alien character, Disney is planning to produce new films starring the nasty creature.

A couple of other films which might fall into an iconic status, if nothing more than style and timing. Blade Runner (1982), starring Harrison Ford, brought a film noir mystery overtone to a futuristic, sci-fi oriented film. The more recent update to the theme, Blade Runner 2049 – Denis Villeneuve, did not interest me and I could not comment on it. Thelma & Louise (1991), starred Geena Davis, Susan Sarandon and a young Brad Pitt in his first major role. This road trip for two women resulted in 6 Oscar nominations, winning for Best Original Screenplay. This female “buddy” movie has become a classic and in light of today’s “Me Too” movement, it is probably well worth revisiting.

Finally, all directors have certain actors they like to use in their films. For Scott, that actor is Russell Crowe who has appeared in five Ridley Scott films. The three other than those noted earlier are: They are: A Good Year (2006), American Gangster (2008), with Denzel Washington and Body of Lies (2009) with Leonardo DiCaprio and Mark Strong. 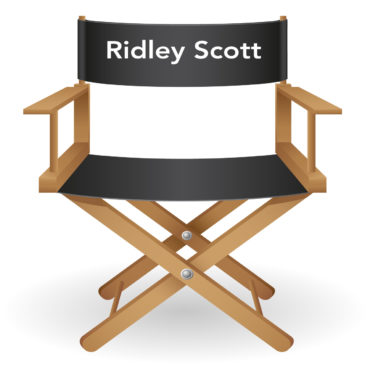 On today’s episode we discuss one of Johnny’s favorite directors. We talk about Kingdom of Heaven and other great movies he has directed. We discuss movies that we have seen […]