Eddie and I recorded this episode prior to the week of the 50th anniversary of Neil Armstrong and Buzz Aldrin’s landing on the moon. The landing occurred on July 20, 1969. We wanted to complete this podcast so you might have time to view or re-view the films we discussed prior to the anniversary date.

In order to set the stage for our conversation, I outlined some background material so that our listeners would have context in which to understand our conversation. I began by giving a brief summary that led to the ongoing competition between the Soviets and the US to be the first to conquer space.

The decision for the US to target the moon was a natural extension of competition with the Soviet Union that began in the shadow of the victory over Germany in World II. The initial conflict was the division of Germany in two sectors then it elevated with the two countries possessing nuclear bombs. This scientific and militarist competition led to the Soviets placing the first orbiting satellite, Sputnik, in space in 1957. This set off an alarm that forced President Eisenhower to initiate a scientific emphasis in US education. The ongoing distrust led to our U2 high level spy flights over Russia. Our clandestine efforts were exposed when Francis Gary Powers was shot down. His trial by the Soviets heightened the tensions that existed and this later led to the confrontation with Russia having missiles in Cuba that threatened the US in 1962. This confrontation was something those of us living at the time feared could be nuclear annihilation except for the cool diplomacy of the Kennedy administration. This two week long standoff was the subject of the film Thirteen Days – Roger Donaldson (2000) starring Kevin Costner and Bruce Greenwood.

The U2 incident led to a diplomatic trade of Powers in exchange for a Soviet spy, Rudolph Abel, who was being held in the US. This exchange was dramatized in the film, Bridge of Spies – Steven Spielberg (2015) with Tom Hanks and Mark Rylance in the starring roles.

The competition really escalated when the Russians were first in putting a dog in space, then a man, then a woman, then the first man to walk in space. We initiated the Mercury astronaut program to play catch up. Kennedy seized upon the challenge of being first to get to the moon within a decade as means for us to demonstrate to the world our commitment and capabilities in meeting such a challenge. As he said in the speech he delivered at Rice University in September, 1962. “We do it not because it is easy but because it is hard.”

We played a portion of President Kennedy’s speech at Rice University to provide even more clarity to the emphasis of the challenge to reach the moon within a decade that he posed to the American people.

We began our conversation of the selected movies describing the events surrounding the landing by Apollo 11 by discussing a documentary which was produced by CNN films. The film is Apollo 11 – Todd Douglas Miller (2019). This documentary, directed and edited by Todd Douglas Miller, has no narrator butuses never-before-seen footage and audio recordings that take you straight into the heart of NASA’s most celebrated mission as astronauts Neil Armstrong, Buzz Aldrin and Michael Collins embark on their historic trip to the moon. The film took two years of work and is made entirely of archival 70MM footage. Over 11,000 hours of audio recordings were evaluated. The film was originally prepared to appear in IMAX theaters as well as museums and science centers.

While I am old enough to remember viewing the landing and experience all of the excitement surrounding the project, Eddie was amazed to see the vast crowds of people that gathered all around Cape Canaveral in anticipation of the lift off. Likewise, the scale of the event and the challenges the astronauts faced during their journey – especially the landing, the lift off from the moon, the return and the fact they were quarantined for 18 days upon arrival – added to the amazement.

Eddie emphasized the differences in computing equipment at that time as compared to today. He illustrated that a hand held computer in 2004, today’s Apple phone and even his Apple watch possess staggering computing power compared to that which took the astronauts to the moon. I joked that he could literally launch the ship with his Apple watch.

At the end of this commentary, you will find a list of items that we know today that were the result of the innovations made by the NASA program. And, he outlines some items that many believe came from that program but did not.

We discussed the following movies that also relate to the Apollo 11 mission and one that nearly met the type of disaster that many people feared would happen during the moon flight.

Hidden Figures – Theodore Melfi (2016) — Three brilliant African-American women at NASA — Katherine Johnson (Taraji P. Henson), Dorothy Vaughan (Octavia Spencer) and Mary Jackson (Janelle Monáe) – serve as the brains behind one of the greatest operations in history: the launch of astronaut John Glenn (Glen Powell) into orbit, a stunning achievement that restored the nation’s confidence, turned around the Space Race and galvanized the world.

The Right Stuff – Philip Kaufman (1983), based on Thomas Wolfe book, directed by Philip Kaufman, chronicles the first 15 years of America’s space program and the creation of the Mercury 7 astronauts. Primarily fighter pilots and test pilots chosen for their skills and possession of the perceived necessary qualities, i.e. the “right stuff”. Early showcase for actors who went on to good movie careers. Ed Harris, Dennis Quaid, Scott Glenn, Fred Ward and Lance Henriksen. Also, several actresses who played the wives also went on to good careers – Veronica Cartwright, Pamela Reed, and Barbara Hershey. Donald Moffatt played Lyndon Johnson and established actress, Kim Stanley, played the owner of “Pancho’s” the bar at Edwards Air Force Base which is central to early portions of the film.

The film brought distinguished wartime hero and test pilot Chuck Yeager, played by Sam Shepard, who first broke the sound barrier, to the public’s attention. Yeager wasn’t in the astronaut program because he lacked a college education. Yeager has a bit role as a bartender at “Pancho’s”.

First Man – Damien Chazelle (2018) – Based on a book by James R. Hansen, the film focuses on Neil Armstrong, a laconic Ryan Gosling, as he works toward his epic and successful landing on the moon on July 20, 1969 aboard Apollo 11. His relationship with others in the program, especially Ed White, the first to walk in space. The movie shows how families are affected as the stress and dangers of the program become evident. The impact of the fatal fire in January, 1967 that killed White, Virgil Grissom and Roger Chaffee as they trained for the 1st Apollo mission hangs over the events leading to Armstrong’s trip.

His wife, Janet, is played by Claire Foy. One of the best scenes, in my view, is when Janet challenges Neil to tell his two sons about the inherent dangers of the mission and the possibility of never returning. Neil’s response to his son’s questions is what one might expect to hear from an astronaut. Foy, of course, is well known for her portrayal of Queen Elizabeth II in the British TV series, The Crown. Foy, most recently appeared in The Girl In the Spider’s Web – Fede Álvarez (2018).

Apollo 13 – Ron Howard (1995) – This Hollywood drama is based on the events of the Apollo 13 lunar mission. Astronauts Jim Lovell (Tom Hanks), Fred Haise (Bill Paxton) and Jack Swigert (Kevin Bacon) find everything going according to plan after leaving Earth’s orbit. However, when an oxygen tank explodes, the scheduled moon landing is called off. Subsequent tensions within the crew and numerous technical problems threaten both the astronauts’ survival and their safe return to Earth.

Note:  The fears many had for the possibility of astronauts not returning from the moon trip never materialized. However, this journey brought the world face-to-face with that stark reality until the quick actions of the team on the ground enabled the crew to escape disaster. One of my favorite scenes is when the engineers on the ground have to resort to using slide rules to calculate a solution to get the crew home. These actions were necessary because the cumbersome computer of that time could not be re-booted within the time the decision need to be made.

ITEMS WE USE EVERY DAY THAT WE OWE TO NASA

NASA DID NOT INVENT 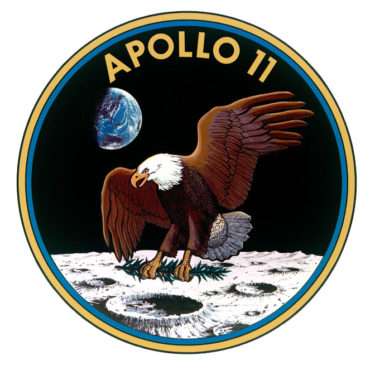 On this episode we discuss movies related to the 50th anniversary of the 1969 Apollo 11 Moon Landing. With help from President Kennedy, Johnny gives us a little background on […]