Eddie and I have talked about how movies can encourage us to learn more about historic events. Most recently we reviewed war movies and there are numerous of those. On an upcoming episode we will discussing films that relate to events surrounding the Apollo 11 moon landing which will have its 50th anniversary later this month.

Because of the upcoming 4th of July holiday we wanted to explore films that reflect that historic period. However, when it comes to films about the Revolutionary War and the events surrounding 1776 and after, the number of films is not that great. This is especially when we consider major movie productions.

To come up with enough films, we decided to select films that either represent the period; have governmental or patriotic themes; use references to the holiday; or, finally, have “independence” in the title – which we admit is a bit of a thematic stretch.

However, we hoped that our discussion would add something to your 4th of July celebration. We thought this might encourage you to take time to reflect on the early days of our nation and the sacrifices of those first American patriots who pledged their lives, their fortunes and their sacred honor to bring forth a new nation in 1776.

Eddie took the lead in our discussion and spent time describing various elements – many of which were humorous – of the movie 1776 (1972). This film was the screen adaptation of the original Broadway musical. It starred William Daniels as John Adam (Massachusetts), Howard DaSilva as Benjamin Franklin (Pennsylvania) and Ken Howard (Virginia) as Thomas Jefferson. It was these three along with Robert Livingston (New York) and Roger Sherman (Connecticut) who comprised the committee to draft the declaration. Jefferson, of course, did most of the composition.

The Continental Congress met in Philadelphia at Independence Hall. It was hot and flies were prevalent. Eddie described how the members tried to battle the flies and cope with the heat of the summer. The heat inside was made more oppressive with keeping windows closed, not only to provide some secrecy to the gathering but to prevent the intrusion of the irritating insects.

Eddie pointed out that despite a decent production budget the film barely recouped its costs at the box office. It seems the timing for such a film based on these events was not good. Eddie then introduced an earlier Disney film, Johnny Tremain (1957), that portrayed revolutionary events that gradually led to that gathering in Philadelphia in 1776. The film describes some early rebellious events – most specifically a recreation of the famous “Boston Tea Party” – as perpetrated by the Sons of Liberty in Boston.

Young Johnny is learning the silversmith trade in Boston and is gradually swept up in the events. The film showcases John Adam’s cousin, Sam Adams, who was one of the leaders of these early revolts against the actions of King George III and the British soldiers. This film has a host of solid, second tier actors and there is enough action and story line to entertain even the youngest viewer. After all, it is a Disney production.

In addition to 1776 and Johnny Tremain, here are the other films we discussed on the podcast. The first group of films are those that that deal specifically with events of the Revolution.

1776 (1972) – William Daniels, Howard DaSilva among those in musical of the events leading to the signing of the Declaration of Independence.

Johnny Tremain (1957) – A Disney film from the 1950’s describing the exploits of the Sons of Liberty who led rebellion (including Boston Tea Party) against the British in Boston.

The Devil’s Disciple (1959) – Based on the George Bernard Shaw play, Kirk Douglas and Burt Lancaster cause havoc for General Burgoyne (Laurence Olivier) during the Revolutionary War.

Revolution (1985) – Al Pacino and Donald Sutherland star in film describing a man’s fight against the British to avenge torture of his son by redcoats.

These are films that reflect aspects of the government, have patriotic themes or use of 4th of July in the title or describe events occurring around the 4th.

Born On the Fourth of July (1989) – Tom Cruise stars as Ron Kovic in Oliver Stone’s true story film about an angry, paralyzed Viet Nam veteran who becomes impassioned critic of the war.

Wilson (1944) – Biography of President Woodrow Wilson, starring Alexander Knox, that follows career from Princeton to New Jersey governorship to the White House. The movie details his administrative genius as well as his failure, following World War I, to achieve his dream of the League of Nations. Won Oscar for Best Screenplay.

Advise and Consent (1962) – Star-studded cast in Otto Preminger’s film based on Allen Drury’s novel. Filmed within the halls and chambers of Congress, this movie shows the political intrigue surrounding the pending confirmation of a presidential appointee.

The Best Man (1964) – Henry Fonda and Cliff Robertson star as politicians battling to become their party’s presidential candidate. Gore Vidal wrote the screenplay based on his stage play.

Jaws (1975) – Steven Spielberg’s first summer block buster starring Roy Scheider as sheriff Brody who must deal with the terror of shark attacks during the 4th of July weekend. Richard Dreyfuss supports as the shark expert while Robert Shaw is Quint, the shark hunter.

Rocky 1976) – Sylvester Stallone’s Best Picture film uses the bicentennial year as a backdrop for Rocky Balboa’s championship match against Apollo Creed. The fight takes place in January 1976, the start of the centennial year.

To stretch our theme, we included these last two films which have “independence” in their titles. 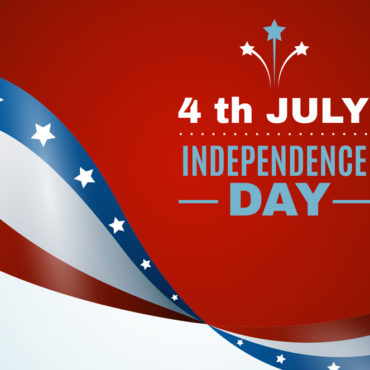 On today’s episode we discuss patriotic films and those that take place on Independence Day. Johnny honors those in the industry that have passed. Eddie lists the movies that will […]